MOOG® Steering and Suspension Continues its Product Expansion in 2019

SOUTHFIELD, Mich., May 21, 2019 /PRNewswire/ -- MOOG®, the industry-leading steering and suspension brand, introduced 220 new part numbers during the first five months of 2019, including 78 first-to-market parts.  These new releases cover over 72 million potential repair occasions.  With over 12,000 parts available, MOOG continues to expand its product offerings on a consistent basis. 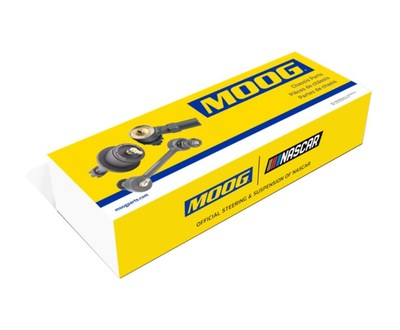 "In 2018, MOOG continued its product expansion by offering over 500 new products throughout the course of the year," said Kim Plante, project management lead, Chassis.  "2019 will be no different, as each month, MOOG will keep introducing new products to its customers to give them premium solutions to cover a wide range of repair possibilities within the shop environment."

About DRiVTM - the future Aftermarket and Ride Performance Company
Following Tenneco Inc.'s (NYSE: TEN) expected separation to form two new, independent companies, an Aftermarket and Ride Performance company (DRiV™) as well as a new Powertrain Technology company, DRiV will be one of the largest global multi-line, multi-brand aftermarket companies, and one of the largest global OE ride performance and braking companies.  DRiV's principal product brands will feature Monroe ® , Öhlins® Walker®, Clevite® Elastomers, MOOG®, Fel-Pro®, Wagner®, Ferodo®, Champion® and others. DRiV would have 2018 pro-forma revenues of $6.4 billion, with 54% of those revenues from aftermarket and 46% from original equipment customers.

Safe Harbor
This release contains forward-looking statements. These forward-looking statements include, among others, statements relating to our plans to separate into two independent public companies.  Forward-looking statements are subject to a number of risks and uncertainties that could cause actual results to materially differ from those described in the forward-looking statements, including the possibility that Tenneco may not complete the spin-off of the Aftermarket & Ride Performance business from the Powertrain Technology business (or achieve some or all of the anticipated benefits of such a spin-off); the possibility that the acquisition of Federal-Mogul or the separation may have an adverse impact on existing arrangements with Tenneco, including those related to transition, manufacturing and supply services and tax matters; the ability to retain and hire key personnel and maintain relationships with customers, suppliers or other business partners; the risk that the benefits of the acquisition of Federal-Mogul or the separation, including synergies, may not be fully realized or may take longer to realize than expected; the risk that the acquisition of Federal-Mogul or the separation may not advance Tenneco's business strategy; the risk that Tenneco may experience difficulty integrating all employees or operations; the potential diversion of Tenneco management's attention resulting from the separation; as well as the risk factors and cautionary statements included in Tenneco's periodic and current reports (Forms 10-K, 10-Q and 8-K) filed from time to time with the SEC. Given these risks and uncertainties, investors should not place undue reliance on forward-looking statements as a prediction of actual results. Unless otherwise indicated, the forward-looking statements in this release are made as of the date of this communication, and, except as required by law, Tenneco does not undertake any obligation, and disclaims any obligation, to publicly disclose revisions or updates to any forward-looking statements. Additional information regarding these risk factors and uncertainties is detailed from time to time in the company's SEC filings, including but not limited to its annual report on Form 10-K for the year ended December 31, 2018.